The people who make up the teams at REVAI have powerful stories. Stories of bravery and courage, of doing what they had to do to achieve their goals despite difficulties and complications. We value those experiences, and we celebrate that they have gotten to where they are thanks to their strength and power of will. For this reason, we decided to share their stories, so that those who are in the same place know that someone else could overcome it.

We thank those who participated in this project, and we hope that we have done justice to their stories.

Tell us a bit about yourself: what did you study, your first career… 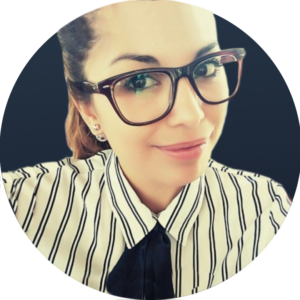 My name is Ailin Rutchle, and I began my career by being part of the Air Force, specifically in the Air Brigade here in Mendoza where I spent several years. At a certain point, I found that I had some range in the hours that I had to complete so I said to myself well, I’m going to start studying. I decided to study to become a pastry chef because this was something that my mother passed on to me, she always made everything homemade at home. Whenever we could, we were kneading and baking.

I graduated, and I kept things on par: in my free time I worked in the pastry shop, and at other times I was in the Brigade. There you do not have a fixed schedule, they have rotating shifts so it was difficult to have another job with that dynamic.

After some time, I even started dancing tango. In 2019 a friend invited me to participate in the Dance Championship of the City of Buenos Aires, where the best couple in Buenos Aires was elected, of which we were elected. That Championship has a lot of prestige, so it was great to find myself being able to win such a competition. Even so, I couldn’t handle everything I was doing. I  was slepping for only three hours. In the morning the Brigade, in the afternoon my pastry business, and at night the milonga. At one point I participated in the military commissions, going North for 40 or 50 days, which interrupted my business. It was a lot of things to do at the same time.

You went through many careers, what was it that prompted you to explore so many different areas?

I always have to keep doing things. I get up in the morning and I have to start doing something. When I left the Brigade I found myself with a lot of free time, I was a bit shocked by the fact that I didn’t have that routine anymore. So I’m always working on something, looking for something to do. There were also moments during my time in the Brigade that made the work environment quite difficult. Everything was a challenge, I was the first woman there in a long time. They didn’t have a Lady’s bathroom, I had to walk three blocks if I didn’t want to use the common bathroom. The things I did were reviewed more times than my male peers’, or my tasks were «derived» or «supervised» by someone else. I felt like they didn’t let me have my space, like it was always my first day even after years of being there. Instances like those put you to the test, and near the end I felt that I had already fulfilled my time with that stage of my life. From there I began to participate in projects such as the Championship for a matter of appreciating the unexpected, and encouraging to know the unknown.

After such a journey, how and why did you come into your current profession?

I felt that that moment had already ended, like I had gotten where I wanted to with that life. I had two years left before I became a non-commissioned officer, but I  decided that this was the moment to close that stage of my life.

Then the pandemic happened, with me already on the way to start a bakery. Luckily, I hadn’t made any big purchases yet, I was just in time.

This is the moment, I told myself, to start studying. And that’s how I started studying programming, which was something I always liked. At that time, I never specialized in the subject profesionally, but during my time in the Brigade an information system was being used where everything that was done manually was recorded in the database. It was difficult for my male colleagues to want to be in charge of those administrative activities, so I offered to fill the position and I ended up being the sector administrator, solving problems and conflicts in the use of the system. This is how I got in touch with programming, and which later gave me some base knowledge when I started studying.

I was researching some courses until I met Henry. It took me a few more months than the standard program proposes to graduate because I was really starting from scratch, in what the programming itself was. The preparation was very intense. But hey, I finished my training, and here I am.

How do you think that having experienced so many trades influences the way you develop professionally today?

In the technology environment, especially in the programming area, there isn’t really much space for women. Currently, we are just entering these spaces. Sometimes I felt that I was going through circumstances that I had already gone through in the Brigade, but the difference is that now I have all these experiences, and a perspective that I did not have before.

Now I have more tools, and I can do things very differently. My attitude changed, now I am the one who seeks to participate, to be involved, to take charge. Before it was a bit the opposite. As a great parallel, in my current team I am also the only woman, we are only eight people. But the circumstances are completely different, the treatment between all of us is different. The work climate is very different.

How did you find out about REVAI? What caught your attention about this project and invited you to participate in it?

After finishing my studies with Henry, Romina Cano contacted me on LinkedIn and we began to talk about what the REVAI project entailed. That interview lasted about an hour and a half, and it was beautiful. We talked about many things, we managed to find a very comfortable space, sharing some common experiences. Starting a working relationship already in that context allowed me to enter the project in a very different, much more enjoyable way. In addition, there is also the fact that one of the main figures of REVAI is Zaldívar, who is also from Mendoza, and has so much experience that people travel from abroad to be treated by him or by his clinics. It was also a little pride to participate in a project created by him, being from Mendoza myself.

Even so, apart from the project, what attracted me was the work environment that surrounded me from the first time I started working here. Unlike other instances in my work life, I felt much better received, I felt like now I was given the space to be part of it, for me to go and make a place for myself. Since I left the Brigade, I had told myself that I was going to prioritize the bond between myself and my colleagues much more, where a healthy workspace is created and allows me to be comfortable in that context.

If someone who has been studying a career, or had a job for many years, makes the decision to change the course of their life but has many doubts and concerns, what advice would you give them?

My advice would be to bet on your dreams. Always. Not because of the fact that you only live once, but because fear will always be there. There will always be room for doubt, it will not disappear. That is why what I would recommend, or would advise, that if you decide what you want to do, and then go do it.

We live in a difficult country, where abandoning life projects or work projects is not easy. There are many risks. But even so, you always have to bet on doing what you dream of. It will be very difficult, and it will cost a lot of things, but the harder it is, when you start to see the achievements the feeling it gives you is incommensurable.

Betting on your future: choosing non-traditional ways to train as a professional